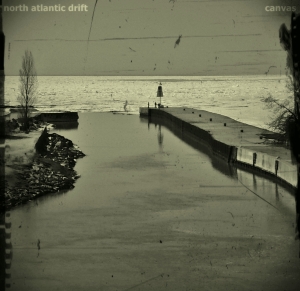 In the summer of 2011 in Toronto, Mike Abercrombie & Brad Deschamps decided to get together. Both were seeking an electronic project of sorts, but didn’t quite know what they would create. Mike was already creating some electronic music and Brad was playing in the post rock band called Epigram.

The first track that they recorded was From The Static and that seemed to work for them so they continued creating sounds, resulting in this release. Most of the percussive sounds that are sampled on the album are from cardboard box hits, hand clasp, shakers etc then heavily processed with effects. They then spent 6 months in a basement studio working out what would eventual become the album, Canvas. They chose the band name not only because it represents where they are from, Canada, but also it seems to fit the dark, ethereal soundscapes we produce.

Canvas is 8 tracks long and is just over 51 minutes long, there is not a bad track on the album. Go check out for yourself, they have the album as a free download on Bandcamp.

This entry was posted on February 21, 2012, 10:02 pm and is filed under Playlists. You can follow any responses to this entry through RSS 2.0. You can leave a response, or trackback from your own site.