“We dont take ourselves seriously, but we take our music very seriously. We do everything ourselves, with the support of our community” – Au Revoir

While reading the interview you can listen to a track from their forthcoming release which is titled Black Hills and the EP is due for release on October 22nd 2013. 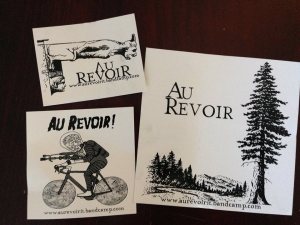 FTY : Can you introduce the members of Au Revoir? Also what is the history of the band.

I am Eric (guitar) and also answering with me is Tyler (drums,) he who cannot be with us, though just as essential, is Dayn (guitar.) We are currently searching for a bassist… apparently being in post-rock type band means having an unstable line-up.

Eric: I started with some tunes in 2009 as well as Dayn having his own material. We decided in 2010, since we were interested in playing the same type of music, we should just join up together (again.) Wrote and started recording “In The Key Of Night” with our old drummer in 2011. We have been playing/ touring since Jan 13 2012, haven’t really stopped since then. Tyler joined in Nov 2012 and has given us the ability to tour. A lot.

FTY : How did the band get its name?

Eric: We were toying with foreign languages and looking for something to match the type of music we were looking to write, Au Revoir was it.

FTY : How did the band members meet?

Tyler: I Kill Giants. They were on the drummer search and my friend Sander who plays in IKG referred them to me.

FTY : Can you describe your sound?

Eric: Intense, emotional, instrumental post-rock, with a post-metal/hardcore tinge to it.

FTY : You are about to release an EP which will be your second release, can you tell me the title and some background to how it was titled?

Eric: The title of the new album, which is an EP, is “Black Hills,” titled after the Black Hills National Forest in South Dakota. The theme of the album came to be during and after the writing of the songs. After realizing how sad and kind of depressing they sounded we went with a darker theme for the album. The songs are titled spanning dates of the worst year of the Great Depression and the album art is of a person (potentially) jumping out of a bell tower.

FTY : What did you learn from making the first album that you applied to how you approached this latest release?

Eric: MUST RECORD BETTER. Haha To me, if you compare the two, they’re almost completely different.  We tend to stick to the same themes, like bringing parts back into play, but for “Black Hills” we went in wanting to write heavier, darker songs and songs with a bit more movement to them. “In The Key Of Night” has some of my favorite songs we’ve written on it but it kind tends to stay in a certain spot, never too much of any one thing. “Black Hills” is what we wanted, more intense, more interesting parts, more emotional, and it sounds better and bigger.

FTY : What is the process for writing the songs? Do you start at the beginning or in the middle? Is it a band effort or single member who writes the songs?

Tyler: We usually have a band member come up with a riff or one of us demos a song idea and then we jam on it and make adjustments.

Eric: A lot of times, we’ll start with one riff and add to that. Whether it ends up being the first, second, last, or only part of the song is completely unknown.

FTY : How do you name the songs on your albums?

Eric: I personally hate long song titles and well, naming songs in general.  So we keep them simple and use them to add to the theme of the album.

FTY : When you are creating or recording your music, do you consider how difficult it would be to play live?

Tyler: Definitely. We try to not let it get in the way of songwriting, but instrumentation too difficult will weaken the song if it’s not played well. However, instrumentation too simple sometimes gets boring. Therefore, we like to create a nice dynamic of the two.

Eric: This genre of music is all about layers and layers of different melodies and rhythms, and our consistent trouble finding solid members makes playing live a fairly difficult task when trying to translate what we recorded into that setting. We tour as a three-piece only (one guitar, bass and drums,) so we acknowledge which songs sound better in that format and work with what we have. It’s a different experience most definitely.

FTY : I know that you play live, will you be doing a tour to promote this latest release?

Eric: This summer we spent about 8 weeks on tour, so we’re just trying to keep quiet this fall and start up touring a bunch again in early 2014. However, we will definitely be doing a week tour of the area in support of the album release and most likely a couple weekends once we get the records pressed and in our hands.

FTY : What bands do you typically play with when you have a live show? Do you like bands in the same genre or a total contrast in sounds?

Eric: We typically play with Post/ Emotional Hardcore and Screamo bands. Not too many instrumental type bands unfortunately.  I do love bands of our nature and am always interested when we play with them, but a lot of times, as with anything, too much of one thing in excess loses its luster. Our style allows us to play with a ton of different types of bands and that’s what keeps shows exciting.

FTY : What or who influences you to do what you do?

FTY : Would you say that listening to bands in similar genres can influence how you sound?

Eric: In my mind, not much will influence me aside from how I would like a piece of music to feel. I’m not a good enough musician to steal someone’s riff and make it my own.

Tyler: Not necessarily. Although it’s good to have influence by similar bands, I feel that the best inspiration comes from bands completely different than our own. That’s how cool sub-genres become invented and bands can stand out in today’s music scene.

FTY : How does the band promote itself, are you finding social media is a good avenue for this?

Eric: Mostly we use Facebook, and really, we need a new outlet. Facebook is a money hungry machine, that unless you went viral somewhere on the internet, it will be close to impossible getting the right exposure via Facebook, unless you’re rich.  Bandcamp is making some amazing steps towards becoming a great interactive music site.

FTY : If you could collaborate with any artist or band, who would it be and why?

Tyler: Still alive? Manchester Orchestra. Otherwise, I always thought a collaboration with Led Zeppelin (with John Bonham) would be great.

Eric: Realistically, any one of our friend’s bands would be amazing to collaborate with. There’s an intense amount of talent around these days. In terms of famous people though, I admire so many artists for all they have done and the road they paved, so though I will forget 99% of them, let’s go with Bruce Springsteen, Neil Young, Dave Grohl, Murder By Death, Sigur Ros, Radiohead, Thrice, mewithoutyou, Brand New and etcetcetcetcetcetc….

FTY : What advice would you give to any band playing instrumental music starting out today?

FTY : Would you say that bands like yourself are turning the music industry on its head. You write, record and release your own music. That was never done without some form of record deal. How difficult is it to do everything yourselves?

Eric: I have actually watched several documentaries on this topic recently and really, there’s no actual “industry” for any subgenre of “rock” music anymore. For “hard rock,” like famed Nickelback, absolutely. But for indie-rock bands, alternative, punk rock, anything that has real guitars, there’s not an industry anymore where executives can live off of your personal income. Radiohead changed that. And they changed it for the better. Sure we’ll have to struggle more and there are a ton more headaches and all of that non-sense but at least we can keep our creativity and integrity intact and not worry about writing commercial bullshit that has to sell. I love writing 10 minute songs without vocals, but we’re not the Grateful Dead and Woodstock isn’t a thing anymore and there’s no way we’ll get rich and famous off of our music. As much as I adore the golden age of Rock N’ Roll and the lives everyone lead, that’s not  how it is these days and I, as well as pretty much everyone else we know, are pretty content with that.

FTY : Last piece of music you listened to, apart from your own?

Tyler: One Of Us Is The Killer by The Dillinger Escape Plan. That album rips.

Eric: Chelsea Wolfe – Apokalypsis and The Men – Open Your Heart

FTY : What does the future hold for Au Revoir?

You can check out the first release from Au Revoir here at http://aurevoirit.bandcamp.com