Posted by fadetoyellow in Playlists on January 30, 2013

Ethernet is the monicker of Tim Gray and this is his second release on the excellent Kranky record label. Opus 2 is the follow up to 144 Pulsations of Light. This ambient/electronic/drone artist produces a real dark atmospheric type sound with a nice beat that is way back in the sound mix. I find this genre of music compelling listening and this album has been on at least once a day for the past few weeks. I find it very fulfilling and I always seem to detect other sounds or weird melodies within the drones. Ethernet is not an artists to uplift your spirits, and it wont put the spirits totally down either. It is music that you can listen to in the background, but I prefer to listen on headphones and that way you can feel enveloped by the sounds that he is creating. This music was created by Ethernet between late night shifts providing technical support for hospital operating rooms. Maybe that explains why the music is more dark than light.

Developing on the trance-induction and brainwave entrainment techniques explored on the firstEthernet album 144 Pulsations of Light, Opus 2 moves into deeper, more introspective and emotive territory. A stronger focus on melody and harmonic structure results in pieces that almost approach, but never quite arrive at, traditional song forms, while still leaving much to the imagination of the listener, evading mental categorization and revealing new sonic experiences with each listen.

The bulk of recording took place during the darkest months of winter in the Pacific Northwest, between late-night shifts providing technical support for hospital operating rooms. The pieces on the album each formed gradually and spontaneously during extended improvised sonic meditations as part of the composer’s own trancework (or self-hypnosis) practice, this in an effort to remove specific compositional intention from the process, instead just allowing them to “happen”.

If 144 Pulsations… was about expansion of awareness and opening to the light that surrounds us,Opus 2 is intended to induce inner contemplation and internalized focus on the light within us. It is also a statement on the gradual darkening and inexorable decay of our modern world, and the need to look within to find true support and sustenance from one’s own energetic source. Patience and perseverance.

Posted by fadetoyellow in Playlists on January 24, 2013

Tactics debut release has been a long time coming, well at least for me. I think I heard a few tracks from this release about 6 months ago or more. I was impressed then and I am still impressed now. There is a rich pedigree of Austin area instrumental bands who are producing great post-rock. This album titled ////////////, or LP1 as Tactics guitarist, Brett Thorne , calls it was released at the end of 2012. 5 songs in total over 30 minutes in length. Two of the tracks, ‘Carved Thrones’ and ‘Identical Movements’ were recorded by Alex Bhore (This Will Destroy You) in his studio. Those are the first two tracks of the album. ‘Carved Thrones’ is a great opener and sets the tone for the rest of the tracks. What I like most about the music is the way that they mix the quiet/loud musical passages, along with really nice time signature changes. I guess all the ingredients are there for post-rock, but they kind of mix the ingredients in a way that it is cohesive and interesting. The track ‘Titan’, which is the albums closer is very low key and very acoustic, it is beautifully executed.

So in summary, this release is well worth the wait and I quote from Brett ‘I am  really excited to be able to focus 100 percent of my attention on Tactics and hopefully try to get at least a 2 or 3 song EP out sometime in 2013. We’re also hopefully going to be getting some shows together here in the very near future’

Posted by fadetoyellow in Playlists on January 17, 2013

Clawson, Michigan based band, Sunlight Ascending, release their 4th album in as many years and it is called Leaving My Waiting Room. The album hit right at the end of 2012 and probably missed a lot of ‘best of’ lists, and while I am not a big list person I am sure this album would have featured on a few peoples top 10’s. This is a top class album, kicking off with the intro track ‘Reductio Ad Absurdum’ a short piece prior to hitting it up with ‘The Dhanbad Rails’ and they hit it up big on this track, great drum intro to this track leading into bass then guitar riffs, nice melody throughout with subtle shifts in tempo which occur frequently. We then move on to Vladdie which has a more acoustic feel to it, an altogether more quiet track all round. Track 4, “Gleaming Apollo’ has a more experimental feel about it, no real melody to speak off, I think it is processed guitar sounds with a great beat in the background. Its a very dark track, and the music is not in the forefront, it is as if it has been supressed somehow, a really nice sound though. So there is a wide variation of sounds just within these opening 4 tracks, and there are still another 8 to go. My favourite track has to be ‘They’re Lonlier On The Outside’, and that is immediately followed by a signature track called ‘Kalkaska’ which has the Sunlight Ascending sound all over it.

Posted by fadetoyellow in Playlists on January 13, 2013 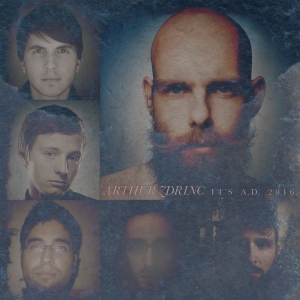 Arthur Zdrinc, member of the Chicago band Sioum, releases his solo debut album titled ‘It’s AD 2016’. This album is a real fine way to kick off the 2013 Record Of The Week on Fade To Yellow. Its a nice mixture of field recordings and stark musical passages. The music comes via mostly guitars and piano and various other electronic sound generating equipment. A lot of thought has gone into this release and he has collaborated with various artists on each of the tracks, most of these artists are from the Endless Fields Studio music collective. There are certainly plenty of dramatic sounds with the tracks and nice field recordings in the mix, its got a real nice ambient feel to it ,coupled with really nice melodies intertwined in the 8 tracks and coming in at just over 48minutes in length. It really is an album that you should invest some time in, and it is a very rewarding aural experience.

“It’s A.D. 2016.” Is a collection of songs that have been on my mind since last year. I worked alongside 5 amazing musicians. I merely brought them my vision, and the various sounds of nature that I collected on my long adventures throughout the northern wastes of Illinois.
Each song captures a moment in time.
Time…
That transient concept.
That elusive and deceiving idea.
Since the existence of mankind… we have micro managed our transient lives with the use of “calendars,” cylindrical tablets of stone, cave paintings. Whether we carve into stone the significant occurrences during our generation, or Vlog each and every meal we’ve had in the last week. Man is obsessed with retention. And specifically in this age of retentia we live in, the human has astronomical potential for merely perfect retention; Of memories, of thoughts, of ideas, Et Cetera.

It’s his story for us all. . .
One historian miscalculates the segments of time he analyzed. . .
And it doesn’t even matter anymore. . .
Or, did it ever matter to begin with?

Posted by fadetoyellow in Playlists on January 2, 2013

July – December 2012 Reflections Of A Year Gone By Part 2