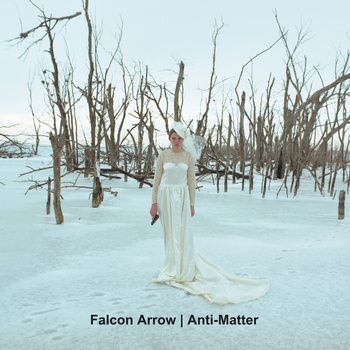 Falcon Arrow’s latest release, Anti-Matter, could very well be their best yet. This Minneapolis duo, Matt Reints (Bass) and David Kemp (Drums), have released 4 albums/EP’s since 2009. You may think that a duo just playing drum and bass, would, well just sound like drum and bass. Due to the clever nature of their play and equipment, it sounds like they are more than 2 people. They claim that it is experimental, instrumental post-rock, and I would totally agree with that summary. They write quirky melodies, just listen to Tamarian Language and for some nice shifts in tempo and textures, listen to Obvious Cipher. This really is an album that never slows down. Track after track, and there are 10 of them, with the album just over 52mins long.  There is something different to hear in each and every track. I cant recommend this album highly enough. These guys deserve more recognition for what they are doing and I also hear that they put on a mean live show.

My recommendation is…..go get it!

This entry was posted on October 31, 2012, 9:32 pm and is filed under Playlists. You can follow any responses to this entry through RSS 2.0. You can leave a response, or trackback from your own site.