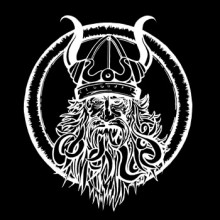 Chicago based Ormen Lange release their second album, Black, this time on Stayposi Records. This is the follow up to the self titled album which was released in 2011 (this first album is also very good). So what about Black, well it is 4 songs and comes in at just 30 minutes long. This is the first release as a four piece, Michael Thomas(guitar) was added to an already strong trio of Brett Rupp(drums), his brother Dane Rupp(guitar) and Kevin Richter(bass). Black definitely has a more polished sound, but you would expect that from a second release. The 4 tracks here are a nice mixture of the heavier side of post-rock and while there is quite a bit of music in that genre, there are not many bands who pull it off. Ormen Lange really do pull it off  and create a really great sound, you only have to listen to the first track, Black Horse, to appreciate how much work they have put into this. It is a nice mixture of heavy, quiet, psych and many more styles in there. The 2 guitars really work well together with the drums and bass keeping it all a bit sane and they pack in a lot in just under 9 minutes, and this is just the opener. Moving on to track two, ‘Precious Blood’, is a nice mixture of dark and moody and light and uplifting sounds. Its the shortest track on the album but its a packed 6 minutes of great sounds. They released a preview track from the album, 1V100, and that is the third track. It has more tempo than the previous two tracks, this track has a more rhythmic start but it really builds into a stellar track. The last track on the album ‘Geronimo’ is a really standout track with some neat guitar sounds, this would appear to have a bigger, more expansive sound with some neat guitar growls in the mix.
To summarize, I highly recommend this album if you like the heavier side of post-rock. It has lots of interesting moments and the production and mix is first class.
Biography
Ormen Lange was officially formed in 2009, playing shows ranging from sweaty college basements to intimate Chicago venues such as Martyrs’ and Schuba’s.With his animalistic approach, the percussionist Brett Rupp’s steady and solid drum beats constantly drive the band forward. On bass, Kevin Richter finds his niche combining elaborate tapping with intense low end distortion. Dane Rupp fills the vocal void of this instrumental band with his harmonious, yet psychedelic guitar.Despite their rising success, Ormen Lange was still searching for their own sound. They sought more, the answer, good friend Michael Thomas. His calculated rhythms and simplistic guitar melodies perfectly compliment Dane’s erratic improvisational style.The four members continue to express their own sound and energy by using their music as a medium and Ormen Lange as their temple.

Ormen Lange at its core is meant to be experienced live.

This entry was posted on March 7, 2013, 8:51 pm and is filed under Playlists. You can follow any responses to this entry through RSS 2.0. You can leave a response, or trackback from your own site.